Posted at 23:06h in Lecture by Occulture Conference Webinars 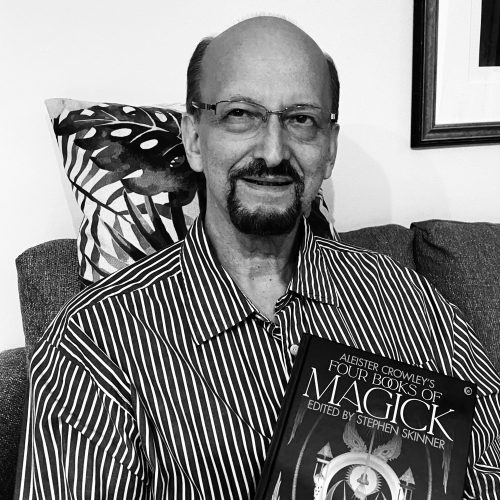 Aleister Crowley’s impact on the discovery of Magic in the 20th century.

An analysis of how magic really works, as opposed to the many theories about it generated by both academics and practitioners.

Examining why magic is not a subset of psychology as Aleister Crowley initially thought when he published his introduction to the Goetia. Nor is it related to spiritual improvement, but to real world objectives.

After graduating from Sydney University, he began his career as a geography lecturer at what is now the University of Technology in Sydney.

He authored The Search for Abraxas in 1972, and migrated to London in the same year where he wrote the Techniques of High Magic in 1976. Soon after, he produced Terrestrial Astrology (aka Geomancy in Theory and Practice) which is still the most complete work in English on Western divinatory geomancy.

He collaborated with Dr Donald Laycock on a dictionary of the angelic language discovered/used by Dr John Dee, and edited Crowley’s Astrology and the Magical Diaries of Aleister Crowley (1923).

From 2004 till 2010 he collaborated with David Rankine to produce the Sourceworks of Ceremonial Magic series producing: The Veritable Key of Solomon, Lemegeton (including the Goetia), Janua Reserata, Sepher Raziel: Liber Salomonis, and Clavis Inferni.

His Complete Magician’s Tables, is a tabular summary of the correspondences of the Kabbalah; angels, demons; the gods of many cultures; the constituents of magic in Latin, Greek, Babylonian and Egyptian sources, gemstones, plants, perfumes and incenses, a total of over 840 comparative tables.

He was awarded a PhD in Classics by the University of Newcastle for his research into the Greek text of the magical papyri (PGM) and its connection with the Latin grimoires. The first part of this thesis has been published as Techniques of Graeco-Egyptian Magic, the second part as Techniques of Solomonic Magic.
His most recent books include the Ars Notoria, with the most complete sets of notae ever published, and an edition with commentary, of Aleister Crowley’s Book Four. He lives in London.