Posted at 17:23h in Art by Occulture Conference Webinars 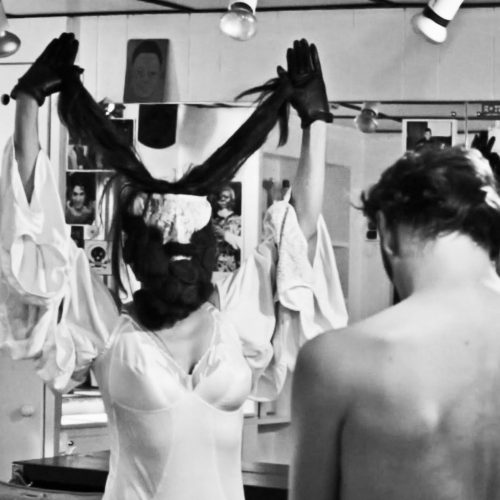 ‘the humming loom of time’ combines elements of fiction and documentary to provoke reflection on the nature of the universe and methods to influence it. The film addresses ideas of politics, migration, gender, materiality, folklore and narrative structures.

We began researching and collecting ideas for the film in 2012. This developed into various scripts, visual drawings and video. We visited places where Alchemists lived worked or died looking for alternative resonances or relations between the contemporary context and their mythic narratives. It was filmed over a two year period in the UK, Germany and South America.
In the former home of the Alchemist Thomas Norton (c.1433-c.1513) in Temple Church, a Knights Templar building, now a ‘Peace Garden’ after being bombed on WWII, we met a homeless man sitting on a bench next to the Church and with his permission we began to film him. In Stanton Drew Stone Circle, Somerset, UK we invited a quantum physicist to talk about circles.
Performance art rituals jolt the film with re-recording original performances in situ or using documentary footage from the live performance. Through mixing these different space times the layers of narrative entwine.
‘If he carried his tail high, they cursed him and tried to kill him. Here the wolf is the corn-spirit whose fertilising power is in his tail.’       ‘The Golden Bough’ Frazer J.G.1892.
Other scenes were recorded at: The Grey Abbey, Home of Leonhard Thurneysser, Berlin, Germany. John Dee’s Cabinet, British Museum, London, UK. The Houses of Parliament, Westminster, London, UK. Estudio de Arte La Obra, (Metal Foundry) Santiago, Chile. Hunrodeiche, Stolberg, Harz, Germany. Authors cited in the film include Edward Kelly and Peter J. Carroll.
We were interested in chaos magic, sigils, food rituals, swallowing letters and unfurling manuscripts. The film creates ruptions between signifiers and the signified in a visual and aural experience. Sometimes disgusting, repulsive, other times maybe beautiful.
“The opposition to a linear narrative scheme makes the piece “the humming loom of time” raise different questions from the perspective of the performative horizon. One of them is the constitution of a film as a body. This body, however, is not that of a specific subject, figure or being, but the of a collective organic mass. And beyond that: it is the body of cinema and art as practice, the body of thought and of that which goes beyond thought. The universe becomes more than an established map, more than a known territory, in the bowels of an infinite labyrinth, that of our presence together.”
Teobaldo Lagos Preller, Film Critic. Excerpt from the text ‘Montage, Body, Friendship’, ‘the humming loom of time’, Berlin,2021.

mmmmmfilms is the result of an ongoing collaboration between the artists Adrian Fisher, Luna Montenegro and Ginés Olivares. They have worked together since 2003 making art films, documentary fiction, performances and installations that have been shown in Festivals, Biennials and Galleries in Europe and Latin America.

They see film making as a collective experience interweaving multiplicities of voices and languages, working on the borders between the political and the poetic, questioning ideas of balance within human an non-human ecosystems. They consider technology, science and magic as an organic weaving developing in physical and virtual spaces.

They met in 2003 filming an ancient South American indigenous fertility ritual ‘OSH’ 18′ in a former Berlin power station. They work together writing, filming, performing and recording audio. They have made 10 short films together ranging genres across performance art re-enactment, documentary and visual essays. Adrian Fisher and Luna Montenegro are Visual Artists based in London making Performance, Poetry, Film, Installation, Drawing and Curatorial Projects. Ginés Olivares is a Film Maker, Editor and Poet working with documentary and fiction based in Berlin.